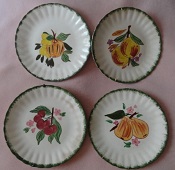 We are giving away 4 Blue Ridge Pottery Plates to some lucky entrant! We have also included an article about the Pottery for your information. Below the article is the instructions on how to enter for this Giveaway!

Blue Ridge Pottery has been a very collectible item in our area and around the United states for many years. The original Pottery was stamped “Clinchfield Potteries” and was located in the mountains of Northeast Tennessee and incorporated as Southern Potteries.

After changing hands again the new owner began to stamp the pottery in the 1930′ as Blue Ridge and the now famous pottery name was born. At one time the Blue Ridge Pottery company supplied more pottery than any other maker in the United states. This was during the war when imports were shut down. Then after the war ended and imports began to flow back into the states the plastic industry became very popular and cut into the sales or Blue Ridge Pottery drastically. 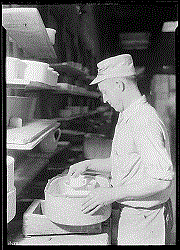 At one point the Southern Potteries Company employed over 1,000 employees who in turn produced more than 324,000 hand painted pieces of pottery a week. By 1956 the Southern Pottery Company had suffered so much in loss of sales to the plastic industry that it’s work force was down to 600 and in 1957 it’s stockholders decided to liquidate it’s assets and close for ever! The pottery plan was sold to a casket company and then the Cash Family’s Clinchfield Artware bought the bulk of it from them. 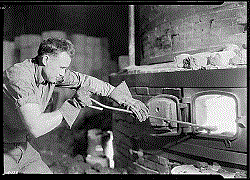 The following was obtained from: WIKI.

“Although the plant closed in 1957, Blue Ridge dishware remained a popular collectors’ item throughout the 1960s and 1970s. In the early 1980s, the Blue Ridge Collectors Club was formed in Erwin, and began documenting the 4,000 or so patterns used by Southern Potteries over the years. The china pieces, stamped with “Blue Ridge Handpainted Underglaze” or a similar variation, are the most popular items among Blue Ridge collectors. Pieces with patterns showing people, animals, or farm scenes are also popular (most pieces show floral patterns). 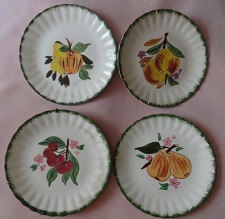 The plates we have for giveaway are the Blue Ridge Fruit Plates above. These four plates are in what I would call very good vintage condition. One has a very small nick and hairline crack on the back I have pictured.  They all show some use but nothing bad. They come with the plate hangers just like we found them in one of our outings on the Back Roads of Kentucky! You just never know what you will find when you get out rummaging around! 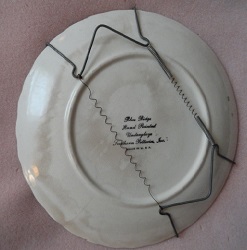 The drawing will begin today, March 3, 2014 and will end on March 8th at midnight!

If you would like to be entered for the drawing to win these Blue Ridge Pottery Plates just leave a comment in the field below. 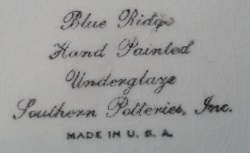 The winners will be a random drawing at the end of the giveaway time specified.

You will receive an email from us notifying you that you have won and at that time you will need to reply with your information we request.

This is a “FREE” giveaway and will cost you absolutely nothing! We pay postage and mailing!

Below are a couple of books from our Affiliate on Blue Ridge Pottery Collectibles.

Good luck and we hope you enjoy these beautiful Blue Ridge Pottery collectibles.