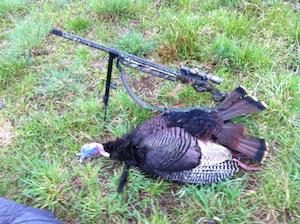 April 18th 2011
It was the Monday morning after the season opener when I headed out to the turkey woods in search of turkey of my own. Jaxen had taken a really nice gobbler on opening day and now it was my turn to give it a shot. I was hunting a familiar field on this day, the same field I took ‘Short Beard’ out of, and now another nice gobbler had taken up residence in his stead. I believe this was the same big tom that Jaxen and I saw first on opening morning that was joined by “gobbler number 2” which is now in the freezer. My ol’ hunting buddy, Hobart Boggs, had tipped me off that the gobbler was in this field the evening before. I couldn’t resist the thoughts of going after this bird for I knew it would be some time before Hobart would get a chance to get back over there. All’s fair in love and war…… and turkey hunting. 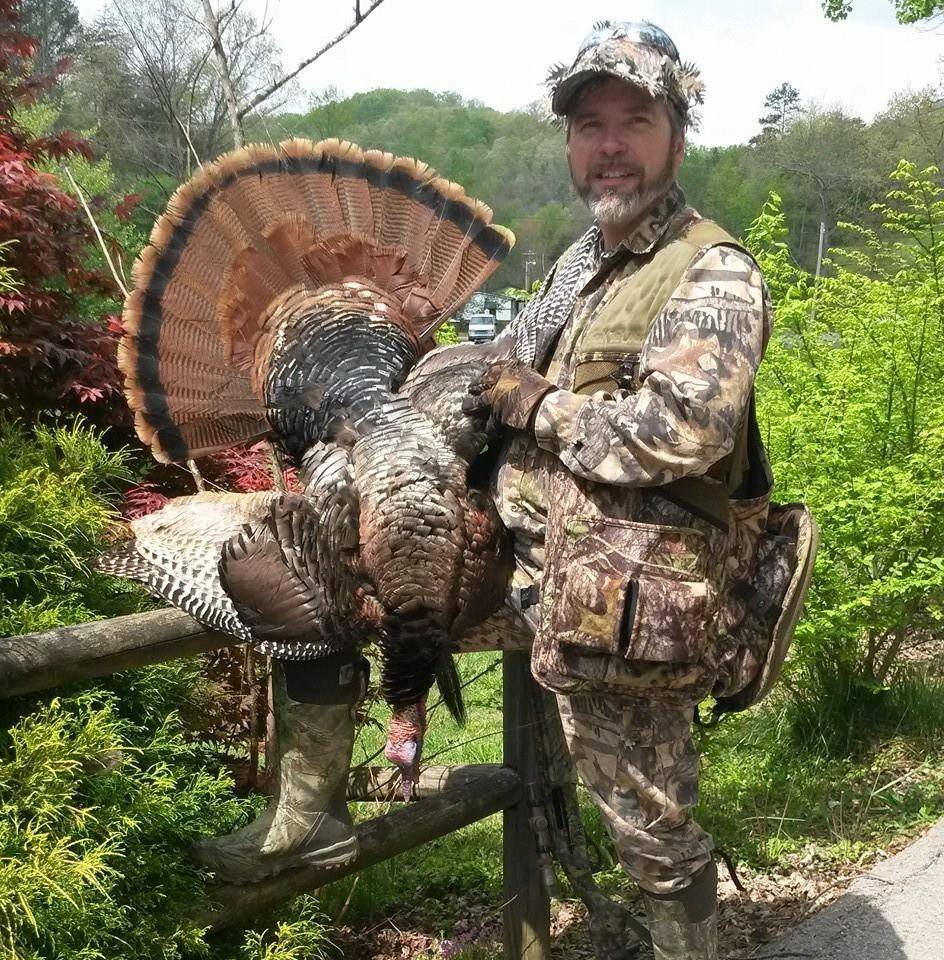 As daylight broke and visibility became clear, around 7:15 the gobbles began. He was straight ahead about 100 yards roosted in some tall pines. I called easy to him and he answered immediately; he gobbled again and this time he was facing me. I thought it was on! until I heard the oh! so! dreaded sound. Yelp, yelp, yelp; he was covered up with hens. He only gobbled about 5 or 6 times before he hit the ground and then it was over for me at that point. My decoy spread was in a low spot in the field and couldn’t be seen by any of the turkeys. It didn’t matter though because they never came close enough to see them. I was able to get the attention of several hens with loud cutts and yelps but couldn’t get them to come to me. Only briefly did I see his tail fan at the field edge as he strutted for the hens. I knew the only way to seal this deal was to try to get in front of these birds and hope it would be close enough to offer me a shot at the tom. So away I went.

I knew the terrain well and in a few moments, I was skirting the field by way of an old gas line that ran the length of its outer edge which also was covered by shrubs and young trees that provided me excellent cover. At the point where I would reenter the field, I did so with extreme caution. Never the less I spooked a hen and she flew into the nearby trees. I took a deep breath! Like an intense predator, I scanned the horizon and field ahead of me for any movement whatsoever, hoping I hadn’t spooked the whole flock. That’s when I saw his fan. He was about 60 yards out courting hard and he had no idea I was there. Now I had to close the distance. 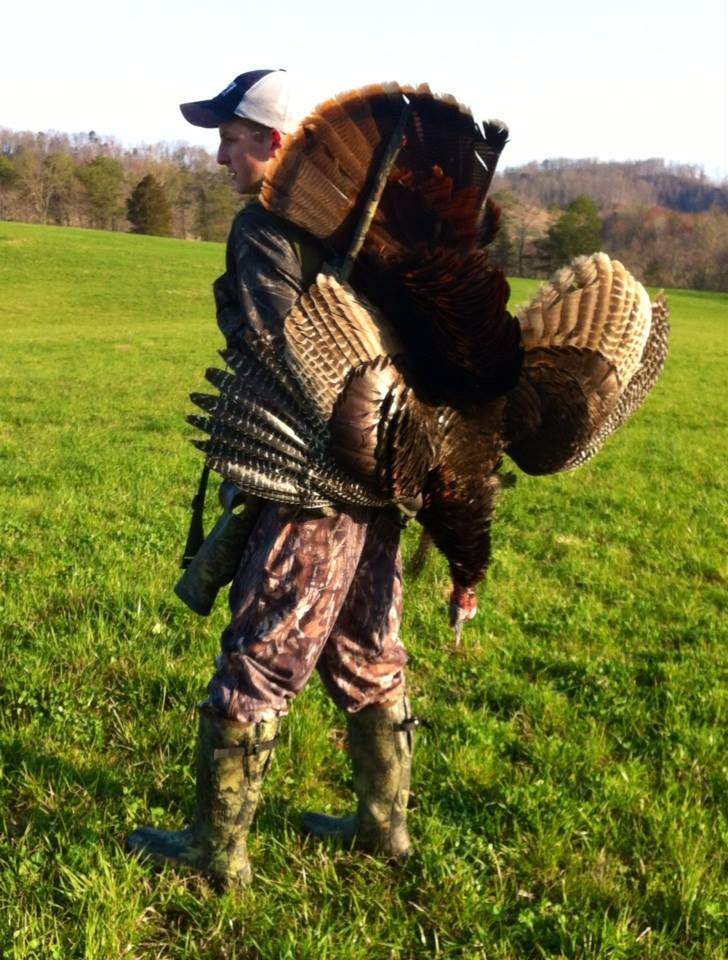 As I stood there contemplating my next move the gobbler came into view and I could see he was with a hen. I was getting to see the courtship dance between the gobbler and the hen and let me tell ya, it was amazing. This was the first time I’ve got to witness such an intriguing sight. The gobbler whirled like a ballerina dancer around and around the hen. I wish I had gotten this on video because it was fabulous. For the next 10-15 minutes I watched the courting ensue and really just stood mesmerized by it all. I also counted about 6 more hens in the flock that, like me, was just standing by watching. Shortly though they moved a short piece and the gobbler began to breed the hen. He completely covered her and I could not see her at all.

I snapped back to my senses, realizing this was the time to make my move. Getting down on my hands and knees I began a belly crawl out into the field, staying as low as I possibly could. I had shed my vest so my outline would be diminished against the horizon and I hoped I would blend into the sparsely scattered field grass. Well, it worked and I was able to cut the distance to about 40 yards. I was thinking to myself that this might just actually work out. The other hens caught my movement but for some reason didn’t react negatively to it. I don’t know what they thought I was, yet I was able to get up on my knees without them spooking. 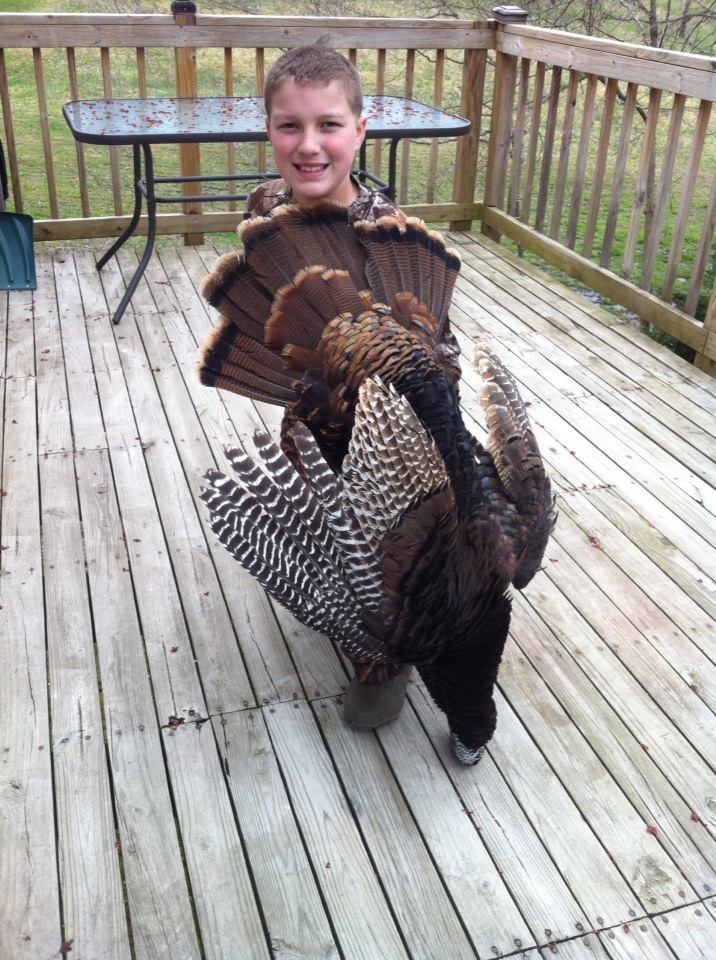 At this point the gobbler was still with the hen and I waited patiently for him to resume his courting to which I was hoping enthusiastically to bring to an end. Yet before I could react, he was right back up and twirling again. It wasn’t the usual strutting you see on TV. You’d just have to see it for yourself to appreciate it. Still, I had a turkey to kill and I had to make a move. I knew I was well within range and I began to slowly rise up completely on my knees in order to get a clear shot. This is all it took for the nearby hens to raise the alarm and gig was up. As the hens began to move away to my right the gobbler sorta snapped out of his trance and he, for the first time, saw me. Surprise!!! Still unsure of just exactly what to do, he began to walk away, looking back at me intently as he went. I let him clear the hens and dropped him with one shot at 47 steps. Ahhh! Now that’s a rush! The hens flushed and flew off leaving me and the gobbler to take care of our business. What a hunt. I immediately thanked the Lord for the harvest and the opportunity to hunt such a magnificent bird. I felt truly blessed for this hard earned reward.

I made my way over to the ol’ boy to see what I had taken and it was to my pleasant surprise to find that he had 3 beards. The main beard was very thick and brushy but only 7 ½” long. The other 2 were 6 ¼” and 4 ¼” respectfully, for a total of 18 inches. He had 1’’ hooked spurs and weighed over 23 lbs. Man! What a nice gobbler! This was my first multiple bearded bird and it really was neat to have harvested him. 1 down and 1 to go, the gobble chase was still on yet the rest of the season would prove not to be so easy. Regardless, it isn’t often a hunter takes such a unique trophy and this is one I wouldn’t soon forget.

Thanks for traveling down a Back Roads with us again.

Story and Pictures are owned by David Warren and any use of any of these must have written consent from him!