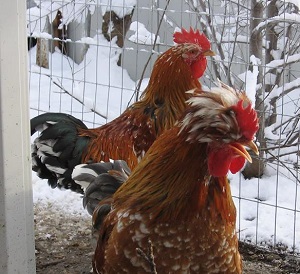 The Swedish Flower Hens are of mixed origin. As our world became larger through exploration; conquerors and explorers brought chickens along on their voyages for the eggs and meat source. As they made port in distant lands, they released the remaining chickens and gathered fresh ones to continue their voyages. As a result, those chickens adapted to the new lands and intermingled with other chickens, creating entirely new breeds, without the intervention of man.

These landrace breeds were developed purely by natural selection as they sought out birds of their own kind. Mediterranean, Asian and European birds alike blended their unique qualities, colors and personalities to become entirely different from the birds of origin.


The Swedish Flower Hen, a very old and rare breed, is no exception to how this breed came about. The actual breeds involved have been lost to obscurity. The breed was brought to Sweden by conquerors and explorers several hundred years ago. Only small villages within Sweden had ever seen or admired the *Bloom Hens*, and few had ever seen them out of their land of origin, until the early 1980s. By the time this breed was discovered in Southern Sweden, they were nearly extinct, due to the introduction of production poultry. Because the *bloom hens* were found in three separate villages, the gene pool was diverse. The crested coif genetics were found in the Vomb region, while the non-crested were located in Esarp, and Tofta plains of Sweden. In 2001, Sweden designated the gene pool and placed the Swedish Flower hens on their endangered species list. 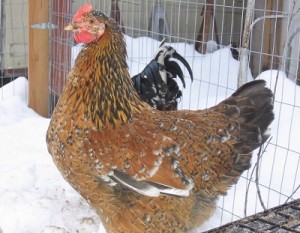 The only thing consistent with the Flower hens is that both genders are spotted or speckled, hence the name *Flower or Bloom Hen*. The bodies are round and the breast of the male is robust and proud. The hens lay up to 200 eggs annually. The average weight of the males is 8 pounds while the hens weigh about 5 1/2-6 pounds. The comb is a large, erect, single red comb. 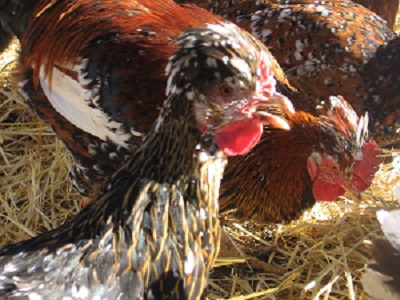 Greenfire Farms was the first to import and breed the Swedish flower hens. Currently, there are about 1000 of these birds around the world from a handful of breeders. Just Fowling Around in Washington State, is very proud to be one of those few breeders helping to bring these birds back from near extinction, by increasing their numbers and sharing the fertile eggs and chicks with others that are interested in that preservation effort. 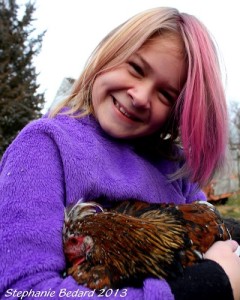 Not enough good things can be said about the Swedish Flower Hens. We get reports from our customers regularly, how they love the breed for their uniqueness, friendliness, hardiness, ability to forage and their alert curiosity of their human caretakers. No two Swedish Flower hens are alike. There are crested, non-crested, blond, black, red, orange and some with blue genetics. Because there are currently no set standards for this breed they are not yet accepted into the American Poultry Association. Their uniqueness continues to amaze even those that breed them on a small commercial scale, such as here at Just Fowling Around.

They mature fairly early, are good layers of very smooth light beige eggs, and make good mothers if allowed to go broody. They do well in warm and cold climates and rarely succumb to illnesses that may be common in other domestic breeds. 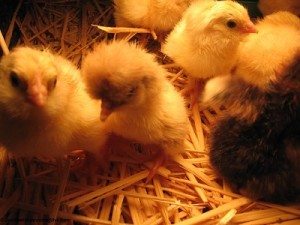 I could go on and on about all the wonderful attributes of the ‘blommenhons’, (bloom hens in Swedish), but the best testimony is from our satisfied customers, that have shared their own experiences with us. One customer that drove round trip over 300 miles to pick up her Swedish Flower hens continues to tell us it was well worth the trip, she just loves her hens. Another has a challenged son with complex ADHD and Bipolar, that loves his hen *Falcon* and holds her and sings to her. Proudly Michael took Falcon to the local fair and showed her in the junior poultry trials and won a blue ribbon this past fair season. Elisabeth, her daughter also in junior class, showed another flower hen purchased from us, again winning blue ribbons. If the awards were not enough, we are told they are therapeutically valuable for Michael’s complex disorder, keeping him calm and focused. 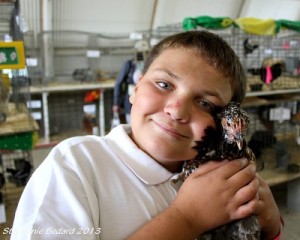 We absolutely believe chickens are great therapy animals and encourage others to consider chickens in therapy programs for challenged children and adults, as well as care centers and nursing homes. Introducing chickens into the public school system by hatching chicks may be the only experience some children ever have with farm life; an experience that will help teach them the value of life and farming in general that they will take with them throughout their lives.

What impresses most people that see our Swedish Flower Hens is the complex patterns and colors as well as the uniqueness from one to another within the same breed. Though they are pretty throughout the season, they are probably the most striking with a snow background. Their colors seem to glisten and become even more vibrant. 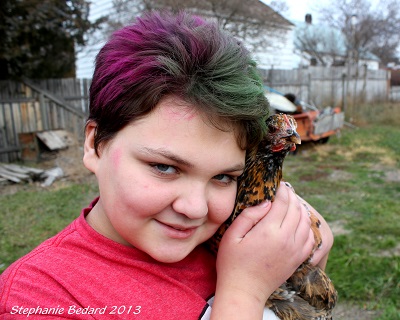 If you are looking for a unique, rare and endangered chicken breed, the ‘blommenhons’ are one breed to highly consider.

We sell our fertile hatching eggs around the nation, and our chicks and laying hens locally. We would love to be a part of your own efforts in preserving this rare breed. Please feel free to visit us on our Facebook Page, Just Fowling Around or contact us via email at: Justfowlingaround@live.com. We will be happy to answer your questions and assist you with purchases.

Thank you for stopping by Back Roads Living.

Please leave your thoughts on these beautiful Swedish Flower Hens in the comment window below.

Polish Chickens Breed for the Home and Farm