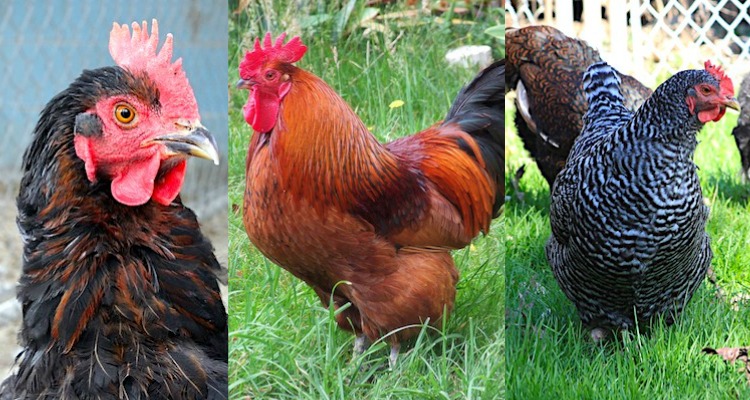 The Heritage breed chicken is types of breeds that perfectly resemble the parents when born; the old-time chicken if you will. These were the breeds raised by our forefathers before the era of industrial agriculture. Typical modern names used to refer to heritage chicken include non-hybrid, heirloom, antique, old-fashioned, and old-timey.

Since the Spanish explorers arrived in America, chicken has been a big part of America’s diet. For the purpose of eggs, meat and pleasure, different breeds have been developed for the best output.

The definition of breeds, published in the Standard of Perfection, begun as far as 1873 by The American Poultry Association (APA). These breeds had adapted well to the outdoor space and in different climatic regions.

According to The Livestock Conservancy, over three dozen chicken breeds are at a risk of extinction. This is as a result of the industrialization of the 20th-century preferring to rear hybrids instead.

Before that, these heritage breeds were a good source of protein (meat and eggs) and reproduction. They are considered the best egg laying chickens around. Extinction would see the
loss of genetic resources in these birds.

The chicken found in the market these days are called hybrids or industrial/modern breeds. They are mostly used for their meat and eggs. Cornish and white Leghorn are one of the conventional hybrids we know of.

These modern breeds are quite wild in the open and have a longer lifespan of up to two years if not hunted. Both heritage and hybrid breeds require clean housing, proper
ventilation and adequate fresh food and clean food.

In a bid to conserve and restore the heritage breeds, The Livestock Conservancy came up with criteria to define them. This means they must meet all the below conditions;


Did you know there were several breeds that fit the Heritage Breed Chicken list?  There are more than 20 breeds that qualify!

• They must originate from APA recognized parent and grandparents’ stock of breeds
(before the 20th Century)
• The genetic line must be traced back to previous generations.
• The breeds must meet guidelines of the APA Standard of Perfection.
• The chicken’s production and siring must be from an APA standard breed.
• The eggs must come from breeds which are APA standard.

• The rate of development should be slow to moderate. This means that it must take approximately 16 weeks to reach the market weight; no less than that.
• This encourages healthy organ development and strong skeletal structure. Long Outdoor Lifespan
• Heritage chicken must be able to thrive outdoors and live a long, productive life.
• For roosters, they should remain productive for 3-5 years while breeding hens, 5-7 years.

Did you know: Poultry has been raised for their meat and eggs by humans for close to 10,000 years?

Thousands of breeds are available with different characteristics and colors. Some are good sources of meat while some are ideally suited for both eggs and meat. Others thrive well in warm
temperatures while others can withstand cold temperatures too. It is therefore imperative that one does proper research before they settle on a specific breed.

These heritage breeds tend to exhibit certain characteristics like beautiful natural colors, long tails and crest, and big feathers. This makes them suitable for ornamental purposes. Here are
some examples of common heritage breeds.

This type is named after a port city in Italy called Ancona where it traces its origin from. The Ancona produces averagely 120 to 180 white fair-sized eggs annually. It is mostly considered a winter breed because it lays longer in this season without the need for additional light. It is a very playful and energetic bird.
It is also considered to be an excellent forager.
In areas where predators pose a problem, the Ancona has gained popularity because of its dark coloring making it hard to spot. 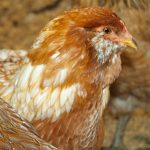 For this breed, the plumage varies in mixed color combinations such as silver, gold, black and brown-white.
This is the only chicken that lays eggs in colored shades of red, blue or green.
Some of the physical attributes of this chicken are bearas, crest, tufts or no tail. 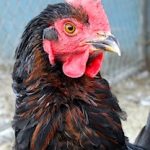 This heritage breed is recognized as an unofficial Australian breed. It is black in color with a large comb.
Males weigh about 8 1/2 pounds while females, 6 ? pounds.
It has a reputation for its great egg laying abilities, averaging 200 eggs annually.
Poultrymen agree that this is one of the best heavy breeds around. 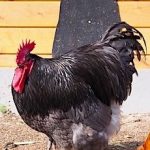 These birds come in several attractive colors such as white, black, blue, splash and bluff; bluff being the most common.
They are named Orpington, which is the town they came from.
They regularly lay brown eggs which are fairly large and grow to a hefty good weight.
Their size makes them perfect for homestead breeding as they are also very white-skinned.

Campines are silver and golden with an average weight of 4 to 6 pounds.
These birds prefer to roam around rather than stay confined.
They lay about 150 white medium-sized eggs per year.
It is a well-known species owing to its intelligence and active nature.
They are considered to be critically endangered birds with less than 500 of them in the United States.
In the US, it is mostly considered an exhibition breed. 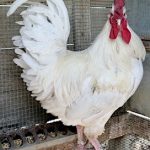 Originally from Italy, the Leghorn is a small sized breed with an ability to lay a huge number of eggs; 250-300 medium to large sized white eggs.
They have very beautiful layers and come in a wide array of colors. Some have a rose comb while some single combs.
In the past, they were kept for form and function while some preferred to keep them for production.
The latter has led to the present day Industrial Leghorn.

These offer great nutritional value and are good layers.
They are calm and polite and therefore blend in well with the others.
They have big feathers that almost cover the toes, long legs, full breast and a deep body. It’s no wonder they are considered stately and graceful.
They produce about 200 large eggs yearly which are a dark brown.
They are originally from China.
Their weight averages from 7 pounds in females and 9 pounds for males. 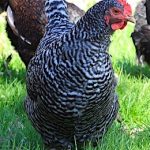 They are simply known as the ‘barred rock’ or ‘rocks,’ and they originated from the United States.
They were bred as dual purpose birds for both their meat and eggs.
They gained their popularity when they were the most bred chicken breed in the United States until World War II.
You will recognize them for their long and broad back, full breast, yellow skin and legs, and their beautiful showy plumage. 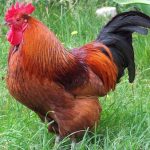 This is one of the oldest heritage breeds in America.
Famously known for being fine broilers, this breed has dual purposes.
There are also industrial RIR bred for purely egg production.
They are listed as recovering by the Livestock Conservancy.
As their name suggests, they descended from the Rhode Island.
They are also able to withstand winter quite well.
Rumour has it that they are great with children.

The video below is a very good source for choosing your Heritage Breed Chicken! They have several and talk about why they chose the Heritage Breed over the others.

A great advantage with the heritage breed chicken is that you know exactly what to expect when the egg cracks. The genetic traits are purely passed on from one generation to another without much
difference.

Research is paramount before deciding on these breeds depending on the purpose for which you want your heritage chicken breed to serve.

Adopting these breeds is also a great way to contribute to the long-term conservation efforts that are being employed to keep them around for many generations to come.