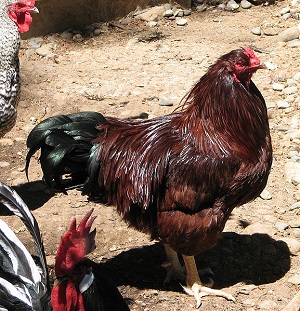 Buckeye Chickens are birds that originated in the 19th century in the State of Ohio. This Buckeye breed is unique in that it is the only breed known to be created soley by a woman, Nettie Metcalf. They have a small pea comb, the only pure bred American chicken to do so, and are very rare birds. They are on the critically endangered list of chickens. Of course, being a chicken bred and originating in Ohio, what other name besides Buckeye would have been a proper fit? They are mahogany in color and the critics say this matches the color of the Ohio Buckeye Plant Seeds?

Barred Plymouth Rocks, Buff Cochins, and some black breasted red games were crossbred to produce the Buckeye Chickens. These birds were developed to perform in the cold and bitter winters of the Midwest. They were actually developed before the Rhode Island Reds (RIR). The Buckeye was never considered much for exhibition because of it’s lack of color variations.

The followin statement was taken from Wiki, “Buckeye has generally been a bird of smaller farm flocks. Today the breed status is listed as threatened by the American Livestock Breeds Conservancy, threatened being defined as Threatened: Fewer than 1,000 breeding birds in the United States, with seven or fewer primary breeding flocks, and estimated global population less than 5,000. The breed is also included in the Slow Food USA Ark of Taste, a catalog of heritage foods in danger of extinction.”

Buckeye Chickens are very good foragers and although they will bear confinement they thrive better in the open. They are generally calm birds but on occasion the Roosters may become aggressive. The Buckeye is a very good meat producer as most of the heritage birds are and is a good egg layer as well laying up to 150 – 200 medium brown eggs a year. These chickens are well suited for small farms and backyards.

Weight and Characteristics of the Buckeye Chickens:

You can order your supplies for our Affiliate below.

If you have enjoyed our article on the Buckeye Chickens drop us a line below. If you have any other information to add we would be glad to hear from you.