The Dominicker Chicken Breed it actually named Dominique. The name has been tossed around and I doubt if anyone can really tell or know when the term Dominicker started being used. These are beautiful stately chickens and are some of the older ones that was brought over during colonial times to New England from their original homes in The country of England!

These beautiful birds have been raised all over the country as they are very good laying hens and good meat sources also! The Dominiker Chicken was valued for it’s feathers in colonial times as well as for many years following for the feather pillows, mattresses( also known as Tick Mattresses).

As stated above the Dominicker Chicken Breed is a dual purpose bird that lays large brown eggs, 3+ a week and makes great table meat. The variety in this is the “Barred”. They are often called Barred Rocks but they are different from this chicken. 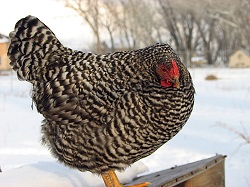 This Dominicker Chicken breed matures pretty early and will begin laying her big brown egg at round 6 months old.

The Dominicker is a very good bird:

Many times they are used as pets and show birds because of their friendly nature. This being said, the Rooster can be a little aggressive when defending his flock. Dominickers have been know to kill small animals when they felt they or their flock was threatened.

Zeus the Dominique Rooster and flock Pic by: “Wiki”

Leave us a comment below if you have enjoyed our article on the Dominicker Chicken Breed. Do you own this lovely breed?

The Cost of Raising Goats for Profit