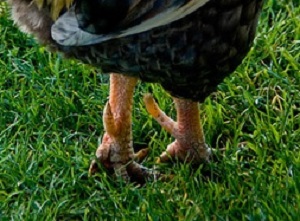 Roosters Spurs are something you are going to have to deal with if you buy baby chicks! If you have bought chicks you most likely have a rooster. Whether you decide to keep him or not is totally up to you!

If you do keep a rooster or two you will need to know a few things about them first!

As a young cockerel ages he may begin to fight with the other boys in the flock. If that happens it is usually nothing to worry about and is actually better to let them get things settled while they are still smaller and weaker. If you prevent them from fighting at a young age they will do even more damage to each other as they get bigger and stronger as the spurs grown in length.


Roosters may also become human aggressive as they age, if they see you as a threat to their hens they will come after you with no hesitation. If they just don’t like you or if you are in their territory they may charge at you, it would depend on their personality whether they would flog you at that time or wait until they see you as a bigger threat. The will not hesitate to use the spurs on you either.

As roosters age they begin developing spurs, which are nail like and become very sharp. Rooster Spurs can be filed down or rounded off so they are not sharp or they can be taken off completely and will just leave the core of the spur which is pretty much like having your toenails removed. either way you do it, it will grow back over time so I prefer the filing and rounding off method. 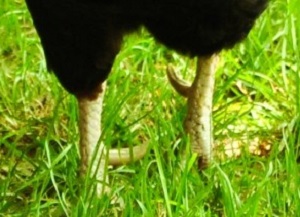 There are several dangers of the roosters spurs. They can damage the hens back when they are mating, they can gash open her side and will lead to an infection which could kill her.

Rooster Spurs are a danger to any human, sometimes roosters can be unpredictable and can flog you at any time and if their spurs are long they can actually puncture your skin. That will cause a major infection and you could possible get E-coli from the soiled spur.

If spurs are left untrimmed they will continue to grow the entire life span of the rooster and will eventually get in the way of the rooster walking and could get tangled up in fencing which could rip the spurs from the rooster causing him to lose a significant amount of blood.

So if you decide to keep a rooster, please keep a watchful eye out for over grown spurs!

Note: Some hens will also develop long spurs but most of the time they do not get sharp!

A very good article I found on removing or trimming spurs CLICK HERE to read.

This article about Choosing the Right Chicken Breed is submitted by, Ayslen Redmon owner of Lots ‘A’ Cluckin’ Farm.


Ayslen Redmon is a breeder of BBS English and Project Lavender Orpingtons.

You can find lost of Rooster and Chicken related item from our affiliate below.


If you have enjoyed this article on Rooster Spurs or have suggestions, please leave us a comment below.