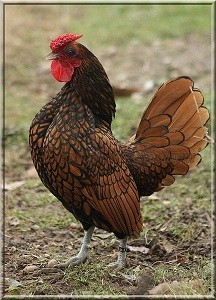 The Sebright chicken breed named after its developer, Sir John Saunders Sebright. It is pronounced “siːbraɪt”. The Sebright is one of the oldest chicken true bantam breeds recorded by the British. This being a “True” Bantam means it has no larger counterpart. The Sebright was bred to be an ornamental chicken breed.

The Sebright Chicken is a small ornamental bird and are among the most popular Bantam breeds available. Although they are popular they are sometimes hard to breed. The Sebright Chicken Breed is largely an ornamental chicken and they lay small white eggs and are not considered a good meat chicken as they are very small compared to your normal meat chickens like a Rhode Island Chicken.

After the breed’s establishment circa 1810, Sir John Saunders Sebright founded The Sebright Bantam Club, which was the very first individual breed association for chickens. The breed has appeared in the American Poultry Association’s Standard of Perfection since the first edition in 1874. Today, the breed is one of the ten most popular bantam chickens, according to the [easyazon_link identifier=”B00GQ785YO” locale=”US” tag=”bacroaliv-20″]American Bantam Association.[/easyazon_link] 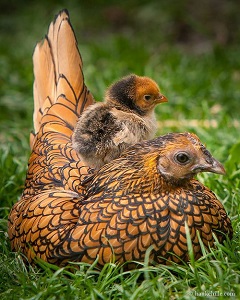 All Sebrights have plumage that is laced around the edges evenly with black regardless of the prominent colors of Gold or Silver Laced. Their legs are slate blue and the beak a dark horn color. Sebright roosters have a rose comb with fine points and a small spike that sweeps back from its head. Combs, earlobes and wattles are normally a bright red. The roosters in the Sebright Chicken Breed carry the same feathering as the hen. This is not common and not many breeds have this same characteristics. Most breeds of roosters have a different feather pattern and some color change from his corresponding hen.

The Sebright Chicken Breed is a friendly bird and can get along well with other chickens. As with many other roosters the Sebright Rooster may turn on you in protection of his hens. They need kept in a fenced in pen as they can be flighty. They are not prolific as laying hens as they only lay around 60 – 80 eggs a year. 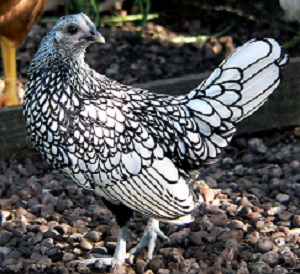 As stated, the Sebright Chicken Breed is not a good meat or egg bird. they are not very broody and the chicks are sometimes hard to raise as they have a high mortality rate. No doubt they are worth the effort as they are beautiful bird. If you are a beginner you may want to raise a easier bird to start with and become more accustomed of their natures and characteristics before trying these beautiful Sebright Chickens. The adult Sebright is susceptible to Marek’s Disease.

Again, Sebrights are considered flighty birds, meaning they are small bodied and have large wings. In the free range setting these would be very difficult to maintain and control as you would be hard pressed to catch them if they wanted to get away from you. This Sebright Chicken Breed has the tendency for the males to be born fertile from time to time and this causes some hardship in breeding. 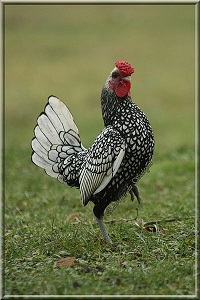 If you are going to raise the Sebright, know it may be a little more difficult and you need to have a fenced in area for them if you don’t want them scattered and hard to catch. They are not hard to keep as they are friendly birds but we suggest that you take precautions to keep them safe from the predators of free ranging.

Note: If you are the owner of the Golden Laced Sebright Hen picture above please contact me so I can give you credit for it.