Vintage Country Log Cabin Broken down but not Forgotten

Old broken down Log Cabin nearly gone but not forgotten! 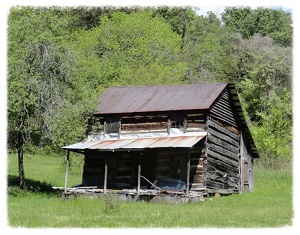 Looking at this old cabin in the back country makes me wonder what and how the owners survived?  I think back to just a time when I was a kid and much of the technology we have now was not even available then. When we go back to the time this old cabin was in it’s youth and prime it could very well be the days of the pioneers and war parties of traveling Indians. This as you can tell was a very strong built log cabin and would hold up to pretty much any kind of weather and assault. No doubt as time passed from the building of this old country log cabin times

changed as it does now. The original owners no doubt had to plow with a horse and hand made plow if they were lucky enough to own a horse!  They carried water from the streams, ponds or lakes for drinking and washing.  The wash was done on rocks or in the stream and hung out on whatever they could find to dry it on . Many made make shift ways to hang clothing inside at night beside the open fireplace to dry through the night.  The life and work was hard but it was clean and honest! The men and many women hunted for their supper and breakfast. They trapped the streams for furs to trade for supplies such as, flour, meal, sugar and items that they couldn’t make themselves.  Most of the children’s clothing was made from the old flour sacks. Many little dresses were fitted with a plain linen top.

The young boys clothing were made from the same and lots of skins were used to make clothing such as deer, bear, etc. The skins were tanned, the meat was eaten and bones used more many purposes including needles and awls.  Nothing was wasted in that day! Sugar was a rarity and so was anything store bought.  These people lived off of the land and learned the secrets of the land!

The Indians were the staple of the land and had lived on it their entire lives!  They knew all the secrets and mysteries that the white man so needed to survive.  From time to time the white man would become friends and learn from the Indian but so many times he was only after the riches of the land that he could get from them.  The Indian and their children wore the clothes that the land provided.  The child on the left is wearing Buckskin and Elk Tooth and the one on the right is wearing a beaded cloth dress. These children and their parents have already been exposed to the white man!  The cloth dress, beads and the photo all speaks of refinement!  Sometimes I wonder just how far we have come and just how much better off we are.  These people were honest and hard working and lived through famine, drought, disease, extreme hunger, and many other calamities that life threw at them.  In the end they were proud people who loved the land and would give their life to keep it simple and clean!  Their world changed over a course of many years and in the end they had to adapt to a new world!

I don’t know?  I truly enjoy running water, electricity, indoor plumbing, central heat and air, cars, trucks, and all the convenient things we have!  I would be lost without them.  Modern day technology has truly propelled us into a computer age that we can find anything and everything we long for if we just log onto the internet.  In just a few short years we have come from class books, cd’s to DVD’s to the the Web! Rotary Phones, Cordless Phones, cell phones and now smart phones that talk to us!  The entire world has changed in just a short time. We haven’t had the time to adjust like our fathers and grandfathers did and sometimes it just overwhelms me when I think about it.

At the end of the day, I wonder if all the change is for the better or worse. I know in the time we live and with modern day technology, many Nations of the World have the capacity to destroy another Nation with just the flip of a switch.

I know you are wondering what this has to do with and old Country Log Cabin all broken down somewhere that it is just being forgotten but it takes me to a time that was much simpler and easy to live in. Times this old log cabin could tell me about if it could only speak!  The worry of the day was if dad was going to get a mess of squirrel for dinner or if there would be a rabbit or fox or some other critter in the trap. Wondering if when mom and the kids went to the stream if they could catch a mess of fish for supper.  Those days are long gone and we have moved into the super fast days of the present.

I just sometimes wonder how much more peaceful life could be if we didn’t have many of the things that distract us from God’s Beautiful Earth!  Do you ever wonder about these things or do I just think too much?

Thank for listening to me ramble this evening.

Share the recipe with your friends by clicking your favorite SOCIAL SITES buttons below! 🙂

National Parks Shuts Down for Visitors