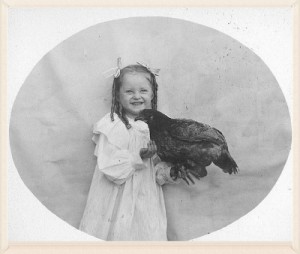 As we grew up in Kentucky were accustom to Chickens running loose in the backyard, known as  The Domestic Chicken. From time to time they would wander out into the front or even in the road. The road was gravel then and there wasn’t a lot of fast traffic then. Not a whole lot of traffic either. I knew everyone and every house on a 2 mile stretch of road.

Our neighbors all had chickens that pecked around in the yards and even the city’s and town’s had chickens pecking in yards! I can remember seeing pictures of folk in the City Limits with chickens in the yards. Glad thing we had domestic chickens. Lots of folk had fresh eggs then.

Chickens have been the source of eggs and meat of many homesteaders and country people. Folks would take their chickens with them when they traveled from state to state. They would load them up in the wagons and haul them along when they moved many times.

Most archaeologist and historians believe the Chicken came from the Red Jungle Fowl and was domesticated in Asia. Thanks to those folks over there for domesticating those lovely birds for us.  Chickens have become a topic of conversation for many cities and towns across America in recent years! Many homeowners are trying to get back to raising their own meat and eggs! The domestic Chicken is a great way to have fresh eggs and meat. You know what they are fed and how they are processed.

Many Modern Homesteaders are raising them for not only the eggs but the meat they supply. They are trying to get back to the basics as much as possible and even home schooling their children. We think this is a great thing!

The Backyard craze has been more for just the eggs and having the fowl around as they have fond memories of them from childhood. A lot of these domestic chickens are being kept as pets and even after they quit laying they are continuing to keep them around for the company and silly habits they portray! Chickens are funny you know! The Domestic Chicken has personalities just like other domesticated animals.

The Chicken has come a long way and is here to stay! I do not see them becoming extinct like their ancestors! They are loved worldwide for many reasons! The Domestic Chicken is going to be around a long time!

What is your favorite Chicken.?

Do you raise Chickens? If so how many and what breed?

Be sure to leave us your comments below.. 🙂

Thanks for stopping by Chicken Review again.