Is Prepping a Cult? Are You a Prepper? 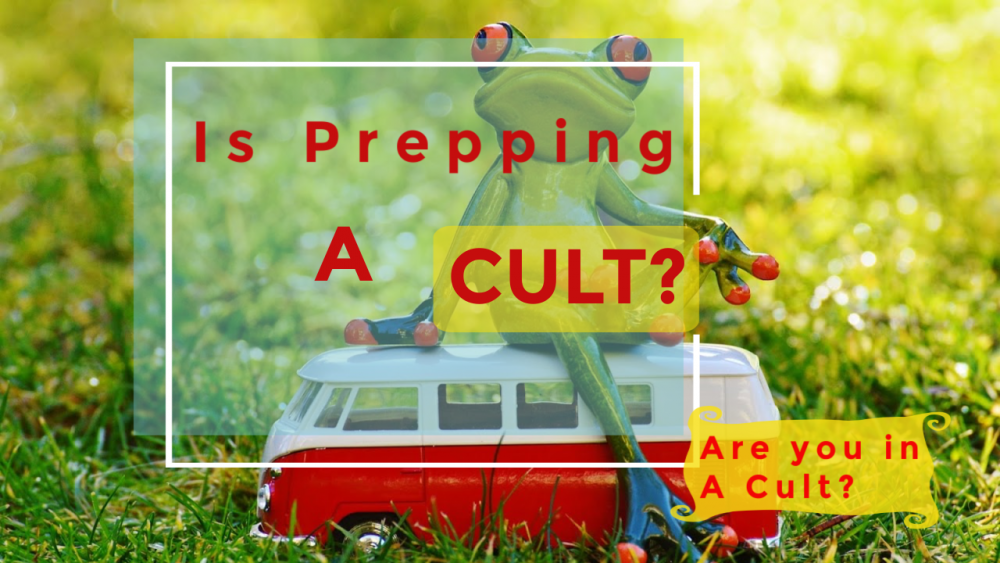 Is Prepping a Cult?

On my YouTube channel I had posted a video about "Food Shortage Fact or Fear Mongering? Food Banks are Struggling!"

This took me by surprise but in reality, it should not have!  There is a pocket of people who go to church in this country who are referred to as faith followers. These folks follow faith teachers who fleece them regularly! They follow blindly and will in the end either miss the Kingdom of God altogether or loose their rewards!

So what is the definition of a cult?

In the English-speaking world, the term cult often carries derogatory connotations. In this sense, it has been considered a subjective term, used as an ad hominem attack against groups with differing doctrines or practices. As such, religion scholar Megan Goodwin defined the term cult, when used by the layperson, as often being a shorthand for a "religion I don't like."

According to this, I hardly think Preppers could be defined as cultish people!

Below is a modified slogan I would like to share. It is how I feel about prepping!

I think we all should prep for the future and that this is a faithful saying! Jesus warned his followers of coming famines, pestilence and tribulation. Should we not prepare for these things.  Of course, we should all prepare spiritually by seeking to know the Lord and knowing that we are known by Him!  This should be first and foremost in our lives!

But when the Lord Himself warns us of impending famines, should we not take notice and prepare for them?

The Lord warned Jospeh of impending famines and instructed him to put back enough grain to last the nation of Egypt and all the surrounding nations for at least 7 years!

God warned Noah that He, God was going to destroy the population on the earth and for him, Noah to build an ark in order to save his family and the animals of the earth.  It was called preparing for a future event!  God instructed him to do this!

I was having a conversation with a friend a while back and ask him was he and his family doing any prepping for what we thought was going to be a second run on food in the grocery stores and his answer was, "No, I have not been hoarding food and I am not going to start now"!  Needless to say, this ended the conversation of prepping with this person. Hopefully we can bring this back up in a future meeting and have a conversation.

I would really like to explain the difference in prepping and hoarding! Hoarding is a sickness and prepping is Biblical!

The Root of Hoarding: What Lies at the Bottom of That Pile

Experts usually draw the line between a merely messy lifestyle and hoarding “when it comes to the person’s ability to function,” Tolin says. “Lots of people may acquire things they don’t need, but if it’s not the sort of thing that causes an inability to function adequately, we don’t call it hoarding. If they’re no longer able to cook meals in their own home, if they can’t live safely in their own home, if they’re a threat to others, that’s where we’d say it crosses the line.”

This is a sickness!

Definition of a Prepper

A person who believes a catastrophic disaster or emergency is likely to occur in the future and makes active preparations for it, typically by stockpiling food, ammunition, and other supplies.

This is a forward seeing person who makes preparations for emergencies.

1 Timothy 5:8  But if any provide not for his own, and specially for those of his own house, he hath denied the faith, and is worse than an infidel.

Many people are afraid to admit there is a problem because they know they are not ready for it and probably would not be able to get ready! Admitting this would mean they would be left feeling venerable and at the mercy of a tyrannical Government!

Of course, we need to be as patient as possible with these people and try to give them facts to open their eyes to what is coming.  This country can not sustain the current path it is on and we are going to see food shortages, violent rioting, stealing, killing and so many more terrible things in the near future.

you see, it doesn't matter who wins the election,  all parties are in bed with the WHO and CDC and plan to bring in the New World Order.  Things are not going back to normal. We are already seeing the Government rev up a third run of this Covid19 virus! This as we who are informed know,, is all a front and just a smoke screen for they to bring in the New World Order.

Let us look at some scripture to deal with prepping.  Please if you are among these folk who think it is a sin to prep, read these following scripture with an open heart and allow the Spirit of God to speak to you!

6 Go to the ant, thou sluggard; consider her ways, and be wise:

7 Which having no guide, overseer, or ruler,

8 Provideth her meat in the summer, and gathereth her food in the harvest.

A prudent man foreseeth the evil, and hideth himself: but the simple pass on, and are punished.

If you are warned of an impending evil and you do not prepare yourself against it and continue on as though it does not exist, you will suffer the consequences of your actions! You will be punished by that evil!

There is treasure to be desired and oil in the dwelling of the wise; but a foolish man spendeth it up.

A wise man puts back provisions and makes preparations for the future! The foolish do not!

The sluggard will not plow by reason of the cold; therefore shall he beg in harvest, and have nothing.

The one who is lazy and does not believe the work must be done even when it is not pleasant, will not reap the rewards when times of hunger comes!

The following verse is used by many who would discourage you not to prep for your future.

Boast not thyself of to morrow; for thou knowest not what a day may bring forth.

Let me be clear, this is one of the most influential verses to be used to back up the thought that you need to prepare for your future!  Of course, this can insinuate the death of oneself or not!  If you have been warned of impending food shortages but you don't know how much time you have left to prepare, should you not be diligent in your preparation and not boast yourself that tomorrow will not be the day of famine?

He that tilleth his land shall have plenty of bread: but he that followeth after vain persons shall have poverty enough.

If this isn't making preparations, then nothing is. When I was a child, my father had our garden plowed and disked so we could lay off rows and plant our seed for a future crop! He would also purchase small piglets to raise through the summer until frost so we could butcher them and have meat all winter long. At harvest time we would stoke a fire under the #3 Washtub my mother kept for canning and she would can everything she could can for the winter months. These were stored in our cellar for future meals.

We fed field corn to our pigs to fatten them before we butchered them. This we grew in our garden throughout the summer.
We raised chickens for eggs and meat! We built a smoke house to keep the pig meat in after salting it down and a hen house to house the chickens

All these things were done to make preparations for our future and my father was very diligent in his position as the head of our house and he took his position of being responsible to provide for his family very seriously! All of our ancestors preppers in this manner!

Please don't take the following scripture lightly. We will be held responsible before God for our actions!

1 Timothy 5:8  But if any provide not for his own, and specially for those of his own house, he hath denied the faith, and is worse than an infidel.

So, is Prepping a Cult? I think not! I would be very careful to accuse those who make preparations for their families as cult members as the Bible commands us to do so.

The greatest preparation one will ever make is to prepare to meet God in judgement!  Do you know Him? Are you know of Him? Seek Him today while He can be found. The scripture teaches that if we seek Him we can find him! Seek Him with a repentant heart. Meaning having grief and Godly sorrow for your sins and He, God will reveal himself to you through His Son Jesus!!

Prepping is Biblical and normal!  Please share this with your friends who struggle with prepping!

Be blessed my friends.

What To Buy When The Food Runs Out