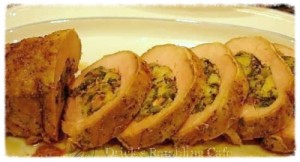 Stuffed Pork Tenderloin Creole is such a flavorful dish! I love Pork Tenderloin. I can remember the times as a small boy when we killed hogs! Yes, back then we raised our own and a lot of old timers referred to the season as hog killing time!

We would strip the tenderloin out of the first hog and my mother and sisters would start fixing lunch! By the time we had that first hog ready to salt down lunch would be ready! Fresh tenderloin! Delicious!

We hope you enjoy this Stuffed Pork Tenderloin Creole

If you have enjoyed this recipe for stuffed Pork Tenderloin leave us a comment below.

Previous Post Natural Tick Repellent for you and your pets. Make your Own! Next Post Lemon Bars Dessert Recipe