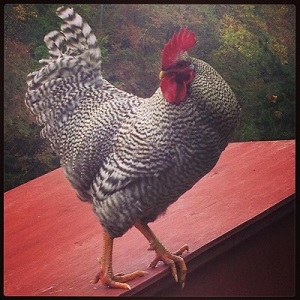 There has been so much written on the city chicken craze that you can do a Google search and find several articles on it. Many of the articles have been written by people who have never seen a live chicken much less raised one! There are all kinds of arm chair chicken bashers out there and like I said, most of them have no clue about chickens and just label them through ignorance.

City Chickens need a little more management than the Country cousin just in the fact it is closer to neighbors. The management is up to the owner not the chicken. The chicken can and will take care of running around and scratching and catching bugs but it is up to you to follow the rules of the City Ordinances. Most Cities have them and it is important to know them.

The City chicken Craze is still very much alive. Many folk don’t take into account that a chicken will live 15 – 20 years and that about 4 years is all the egg production you get from a good layer. What to do at this point if you are not prepared to keep them as pets for the duration of their lives?

Many City Chicken owners are taking their chickens to the Animal Shelters and dropping them off there. Some are keeping them and others are eating them! Yes, eating them. That is the general purpose of a chicken when she quits laying. You can put her ina pot of boiling water and she will become a wonderful and tasty stew. Not to mention, you know what you have fed her and you know what you are eating! 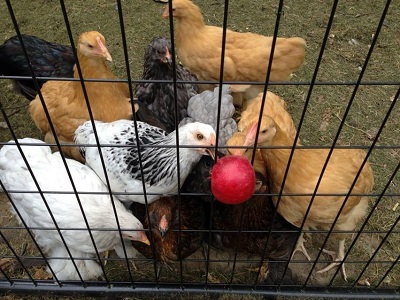 I personally don’t mind hearing that people who raise them until the egg production ceases eat them. People have been butchering and eating their own chickens for hundreds of years and never thought twice about it. I have helped catch and butcher many of them myself as a small child on my Grandmothers farm. When a chicken quit laying eggs it became a feed burden ti them and it was time to have a fresh pot of chicken stew!

None of the coops I ever saw had a heater in them. They had good ventilation but no heat and I don’t ever remember a chicken freezing to death on the farm. We had some very hard and cold winters then too! Chickens slow down their egg production this time of year and many City Chicken owners head to the shelters with them so they don’t have the responsibility of keeping them through the winter.

I know that chickens make wonderful pets but they were meant to be farm animals. I agree they are a lot of fun to watch run and peck and to hear all the different noises they communicate with but still, they are farm animals. Meant to produce food for the farmer.

There are many City Chicken owners who take care of their flocks very well all year long. I would be surprised if the number that does not care for them properly were high at all. There will always be those who do things jsut because someone else is doing it. The city chicken craze is no different. City people read how the City Folk are raising chickens and how much fun they have and what wonderful pets they are, the next thing you know, your neighbor owns chickens too. They may not have a clue as to how or what it takes to raise them but they want them anyway!

If you don’t want to keep your chicken through the winter r if she has quit laying there is another option besides would be surprised if it cost you more than $5.00 – $6.00 to have her dressed out for you. This is inexpensive enough and you get good fresh meat like it used to be. 🙂

There is always a cost to owning any kind of farm animals. No matter what they are they have to be taken care of and there will come a time that they will become non-productive. This is a time that requires a decision. Either have them butchered for food or allow them to stay around as a pet but do not leave your responsibility on the shelter to care for them.

A Chicken in Every Yard