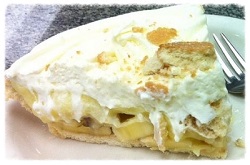 You will need for the Banana Pudding Pie:

The crust: for the Banana Pudding Pie

In a medium bowl, stir together crushed vanilla wafers and butter until blended. Firmly press on bottom and up the sides of a 9-inch pie plate.

For the pudding: Whisk together sugar, flour, eggs, yolks and milk in a heavy saucepan. Cook over medium-low heat, whisking constantly, 10-12 minutes or until it reaches the thickness of chilled pudding. (Mixture will just begin to bubble and will be thick enough to hold soft peaks when whisk is lifted. It must be thick and slightly bubbly to set up properly!) Remove from heat, and stir in vanilla.

Transfer to a medium bowl and cover with plastic wrap, making sure to press the plastic directly on top of the custard so it doesn’t get a “skin” on it. Refrigerate til completely cool. (Can be made up to a day in advance.)

Whipped Cream: In a medium bowl, whip cream on medium high speed til soft peaks form. Slowly add the sugar and vanilla and continue to beat til thick and stiff. Don’t over beat!

Refrigerate at least for 4 hours or Overnight.

NOTE: It’s best to prepare the pudding in advance to allow it to chill properly. If you prefer this pie be topped with a meringue then there’s no need to refrigerate the filling.
An entire box of vanilla wafers were used for this pie. If you want to decorate with additional wafers then get a second box to be on the safe side. We like vanilla wafers! 🙂

Check out our: Banana Pudding Recipe

If you have enjoyed our Banana Pudding Pie Recipe leave us a comment below.

Instant Pot Chicken With Side Dishes