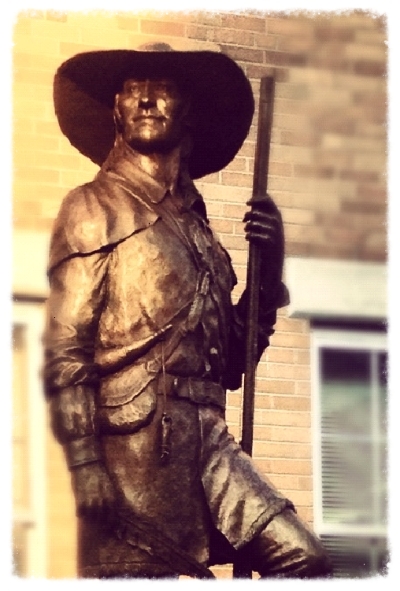 The following information was taken from the Daniel Boone Web Site.

During Daniel Boone Festival week, people pause from the business of daily life to focus their attention on their Kentucky ancestors who settled along the Wilderness Road and on the long-hunt who preceded them. Best known of all the heroes of the first American western frontier, Daniel Boone became famous all over the world for the adventures he experienced in this region of southeastern Kentucky.

Knox County’s Daniel Boone Festival is the oldest continuous celebration in the state honoring the man who embodied the pioneer spirit of Kentucky. The festival was made a Kentucky Corporation with the aim of ensuring that no other community could lay claim to the idea which annually brings thousands of visitors and participants into the city of Barbourville.

The festival was created in 1948 by Union College professor Karl Bleyl as a deliberate attempt to challenge mass media’s demeaning images of Kentuckians by replacing negative stereotypes with an heroic model of frontier adventure. Dr. Bleyl intended the festival educate young people about their ancestors’ crossing the Cumberland Gap into an untamed beautiful land and about the Native American tribes who were here before them.

Although the main purpose of the Daniel Boone festival was educating and inspiring children, the impetus was to provide Cherokee Indians with cane for use in making baskets, chairs and other Native American crafts. Members of the Eastern Band of Cherokee Nation, located in Cherokee, North Carolina, have been honored guests at the festival from the beginning.

Dr. Karl Bleyl wrote the text of the Cane Treaty, often called the first treaty in history of America to be drawn up solely in the interest of the Indians. It has been signed at every Daniel Boone Festival since the first signing on May 21, 1948. The text the treaty appears elsewhere in this book. During the summer of 1949, leaders of the Cherokee Reservation invited Knox Countians to attend a “Barbourville Day” celebration and a performance of their historical pageant, “Unto These Hills” as a gesture of continued friendship.

Within a very limited time span, Professor Karl Bleyl, Union College and citizens of Knox County not only staged the first Daniel Boone festival but at the same time created virtually every essential event that is still used today. The modifications of the festival have been small, such as introduction of the long-rifle shootout in 1949, the dropping of an annual Union College historical pageant play, and the addition of antique car shows and other events which followed in succeeding years. Yet while the festival was gradually extended from less than two full days to a week in length and moved from the month of May to October, the essential play that you see in this book’s program, or “Almanac,” was established at the very beginning.

This years Daniel Boone Festival is set for Oct 5 – 11 in downtown Barbourville Ky. For schedules visit the link below. You can also view daily videos of festival activities on the interactive news portal at www.mountainadvocate.com

Stop by and visit if ya can! 🙂