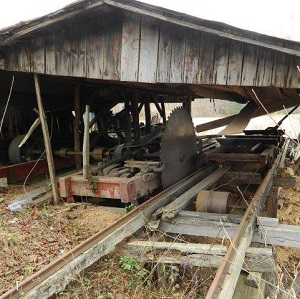 Back in Dad’s younger days, there were no payroll jobs in our community until small, movable sawmills started production in the mountains. Work crews set up operations in different locations where standing timber was logged and then sawed and loaded on steer-drawn wagons to be hauled out and shipped by train to various parts of the country.

When Dad’s hands were not wrapped in plow lines, he pulled the “money stick” at a sawmill. A “money stick” is a hand-operated lever attached to belt-driven shafts that move the log carriage into the huge saw blade. Ten long, hard hours earned him one dollar a day.

Lying underneath layers of patchwork quilts on winter mornings, I listened to the rattling of Dad’s galluses as he snapped the blue bib of his denim overalls into place over his chest. The laces of the black work boots he pulled on were covered with tan and white sawdust that often scented the room with pine. After breakfast he reached high above the fireboard (mantel) for a twist of tobacco that he had grown in the field, dried in the barn and twisted in pieces like hairpins. He called tobacco “a grown man’s candy” and his “nerve medicine.” Finally, he grabbed his sweat-stained hat and well-packed dinner bucket and headed to work at the sawmill. Dad’s long-term commitment of love and responsibility fueled muscle and sweat to feed, clothe and shelter the family. 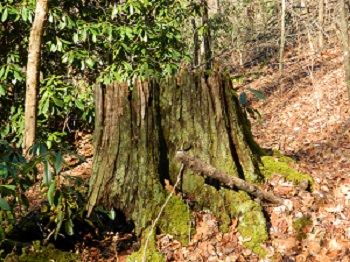 Logging in the mountains was hard, dangerous work. Brother Ellis remembers, “Dad sawed for Homer Grist who set up his mill right above our house. Homer had a few hired loggers in the woods. They worked four stout steers that snaked timber out of the woods to load on a log cart. One time, the log cart was heavy loaded as the steers waited in a place called “The Roughs”. Uncle Frank and another man was pulling a crosscut saw to fall another big tree. When the tree fell, it spooked the steers, and they took off running down the steep, rocky road. The log cart didn’t have any brakes, but you couldn’t have stopped the wreck anyway. Uncle Frank reckoned the log cart hit a snag, causing it to overturn down a steep bank. He said all you could hear was the crashing and rolling of logs and sixteen steer legs turning over and over rolling towards the creek. The teams were yoked together with no way to get loose. Two of the steers were killed, (Red and Ruddy) and two were miraculously unharmed (Buck and Bald). I don’t reckon anybody ever went back up there to finish logging that area. You can see today the huge stump in the woods from the tree that spooked the steers.”

If you have enjoyed Barbara’s story about “Pullin’ The Sawmills Money Stick” leave us a comment below!

Thank you for stopping by Back Roads Living.