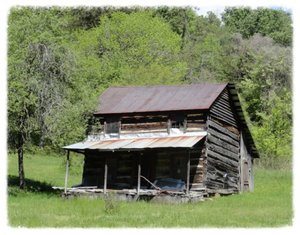 An unsophisticated country person, associated originally with the remote regions of the Appalachians.

This is an article I have studied about many times. I do not mean any harm or disrespect for the Hillbilly in this article as I have been referred to as a Hillbilly many times in my own life. I love the old Hillbilly ways and talk. I have heard so much of it over the years and miss it as the old timers are passing away! I just thought I would share a little bit of my memory and love for the mountain folk.

Tarnation = “Damnation”, this is a curse word to hill folk and they don’t use it!

Instead we use, what in “tarnation” are you doing?

Feedbag for when you get Hongry (hungry) for Vittles (food), this consist of taters, maters. You know potatoes and tomatoes. Just a little slang for the actual word.

We use to go up yonder! That is the distance from here to thar! You know, down the road a piece or up the hill thar or as the crow flies, over by way of the crick (Creek)

A common term I have used all my life is the term used for the valley, you know the gap between the mountains. We called em hollers! (Hollows) John will be comin up the crick over in the other holler. He should be over here dreckly! (Right away or directly)

Now Rednacks (Rednecks) and Hillbillies are not the same people!

Some folk get Rednecks and Hillbillies mixed up!

A Rednack is a southerner usually found in the south. They got this name from the red ring around the neck from working the farm in the hot sun. A neck sunburn! They are normally hard workin people who like to drank (drink) beer, attend Nascar Races, shooting guns and the breeze. You know, just good ole boys of the south. Modern Rednecks can be found as far north as Michigan I hear!

A Hillbilly is a Country and mountain folk from the hills of Appalachia! The hillbilly is a very independent person who raises their own food and drink! Moonshine is not uncommon to be found in the community of a bunch of Hillbillies. Hillbillies are very proud people and did not want any social workers or others to come into their communities offering Government help. Many of these supposedly caring people got run off the property or out of the home at the end of a squirrel gun (shotgun)!

My family had a favorite term for something large, It was always a big as “Sid’s Newground” I never did meet Sid but his newground must have really been something to see! “Newground” was an area of property usually inhabited by a lot of timber that had been cut and cleaned up so it could be plowed. They would cut the trees and pull up the stumps in order to plow and plant their crops. If you ever run into Sid let him know my folk has bragged on him for years! 🙂

I memeber (remember) one time we all went fishin down to the crick and this was a normal thang through the summer. Weus (We was) going to try to ketch (catch) a mess of fish! We get down thar and the durned fishin lore is out of whack! Them durn peller (Propellers) on the back is all mussed up!

Now I have carried a whuppin many times in my life! Have you ever carried a whuppin? This term means that your parent or parents are going to whip you for something at a later time. Now you have to carry the dread of it until it happens! We may have been in town and dune sumthin that deserved a whuppin and since our parents didn’t whup us in public they would promise us a whuppin when we got home. Carrying those whuppins almost hurt as bad as the whuppin itself, almost!

I also got several whuppins from my older brother. When our parents were out to the garden or to town we fought a lot! He was much bigger and usually whupped me good!

I know there are many other terms used by us Back Roads folk and I have not mentioned but a few. I know there are many stories of adventure that involve the hillbilly lingo that you would just love to share with us. Go ahead, leave yur comment in the comment box below! Share the lingo! 🙂

If you have a story of the Back Roads, Back Woods, Hillbilly, or otherwise you would like to share with us just get in touch with us by CLICKING HERE