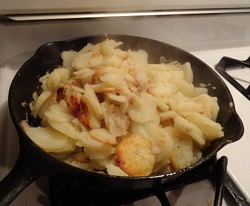 This Skillet Fried Potatoes guide is as about a simply stated as I can make it. Fried Potatoes have been a staple for families as long as there have been skillets! I love potatoes no matter how they are fixed, mashed, baked, french fried, hashed, twice baked, new potatoes in broth with new peas, potato soup, etc! We just like potatoes and they are one of the most diversified vegetables from the garden!

It is important not to slice the potatoes too thick when frying them. Of course the thinner the potatoes the quicker they fry! It is also important to check them often (every 5 minutes or so). Potatoes have to be turned often to allow them all to cook through. The flip side of this is they have to be allowed to fry long enough before turning to allow for some browning on the underside first. Now, we understand why they have to be checked often. If you scorch them they are not very tasty! 🙂

We are also very parcel to our Cornbread recipe when we fry potatoes. This is a very easy and quick cornbread recipe to make. Nothing much better with fried potatoes than a pan of cornbread baked in a cast iron skillet with a big pat of butter put between a slice while it is piping hot out of the oven! Sheew, that was a mouth full! Get the Cornbread recipe “HERE “ 🙂 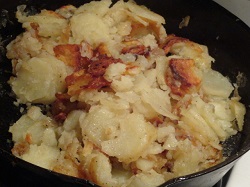 Now comes the good part
You can add all kinds of stuff after you put the potatoes in the skillet.

Another method of frying potatoes in a skillet if you do not want the lard or oil is to fry them in butter and water. This is an old recipe from the south for Skillet Fried Potatoes and I am trying it next!

You can find your necessities at our vendors below.

I hope you have enjoyed this article on Skillet Fried Potatoes. If you do yours a different way let us know by leaving a comment below.